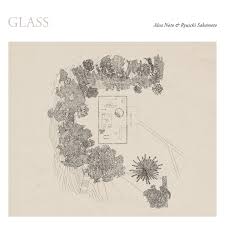 The emotional drama of the forty-five minute performance was echoed in the natural environment. A sudden rain storm forced the evening’s guests into the Glass House at the start of the performance. During the performance, the storm cleared into a dramatic red and pink sunset and concluded in nightfall. Rehearsing only one day before, Sakamoto and Nicolai experimented with a keyboard, mixers, singing glass bowls, crotales, and the architecture of the Glass House. Contact microphones were attached to the surface of the Glass House, and using various weighted gong mallets with rubber heads that were gently but firmly dragged along the surface of the glass, Sakamoto and Nicolai transformed the Glass House into an instrument, creating a wistful sounds of contemplation and longing. Similarly, Nicolai played two sets of high and low octave crotales with a horse hair bow. The pair improvised in what could be described as an intuitive call and response manner. This sense of fresh sound experimentation was captured in Derrick Belcham’s film of the haunting soundscape created by Sakamoto and Nicolai at the Glass House.