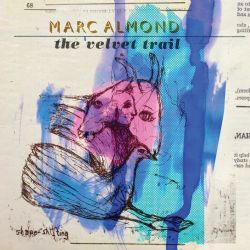 Marc had previously hinted that his 2010 album Varieté would be his last recording to feature his own new material. Famed English producer and songwriter Chris Braide (Lana Del Ray, David Guetta, Beyoncé, Britney Spears), is a huge fan of Marc’s work and succeeded in making Marc change his mind.

Marc says of ‘The Velvet Trail’: “Some of the songs have a more personal melancholy, reflective and evocative, like the title track ‘The Velvet Trail’, a song about memories, nostalgia, childhood and death. So it is too with the song ‘The Pain of Never’ (Chris Braide’s personal favourite). Chris wanted to create his ultimate Marc Almond record, electric, lush, emotional, dark and sexy and I felt inspired by his tunes and production to deliver just that”. He then explains the seamless format of the album: “Chris saw the record as one journey, one record you put on from beginning to end, linking tracks with musical interludes. This a reaction against the downloaded digital age, where individual tracks are taken or albums re-arranged in different orders. I always see my records as a show running from beginning to end that takes you on a ride”.

The Velvet Trail is an album that wasn’t supposed to exist – born from a spontaneous, organic inspirational process. It wasn’t just written and recorded, but felt and created. For all those who love Marc Almond’s work and those who just love true music and the emotions it generates, this is one not to be missed.