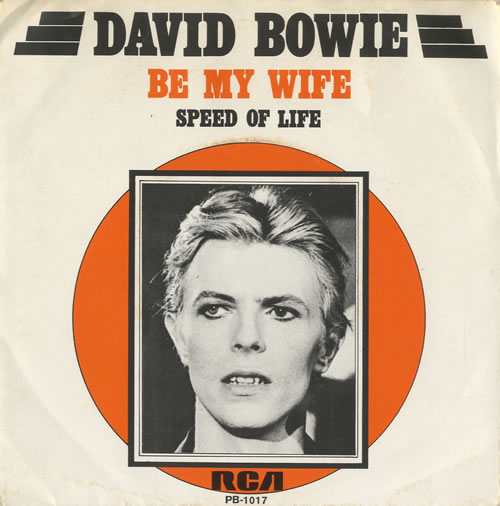 “Be My Wife” is a song and single from the album Low by David Bowie.

“Be My Wife” toned down the electronic feel of the rest of the album. It also featured a more conventional set of lyrics, being closer to a traditional rock song than the more fragmented lyrics elsewhere on the album.

Several analysts of Bowie’s career have seen the song as a last-ditch plea to Angela Bowie in the vain hope of saving his marriage. Tension had arisen between the couple, and disagreements had risen over the location of a new residence in Europe. Angela had shown herself to be heavily affected by his music; he had proposed to her by playing “The Prettiest Star” to her over the telephone. In the end David would not agree to move back to Switzerland from Berlin, and the relationship finally ended in divorce in 1980.

The song features a ragtime piano opening, which serves the somewhat retro lyrics some justice, although it is soon set against a backdrop of guitars and drums. The song repeats its lyrics, changing the spacing of the lyrics amongst the song’s verse. The song closes simply with a fadeout, as the song returns to the introductory ragtime riff repeating indefinitely, with the rest of the band playing behind it.

“Be My Wife” was the second single from Low after “Sound and Vision”, but it became the first new Bowie release since “Changes” to fail to break into the UK chart.

“Be My Wife” was frequently played live on the various tours after its release and Bowie repeatedly announced this song during live performances as “one of my favourites”.