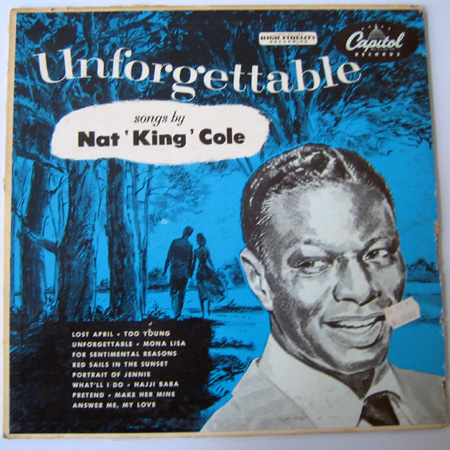 Unforgettable is a popular song written by Irving Gordon. The song’s original working title was Uncomparable. The music publishing company asked Irving to change it to Unforgettable. The song was published in 1951. The most popular version of the song was recorded by Nat King Cole in 1951, with an arrangement written by Nelson Riddle. A non-orchestrated version of the song recorded in 1952 is featured as a bonus track on the CD reissue of 1955’s completely instrumental (save the bonus material) Penthouse Serenade. Cole recorded the tune anew in 1961, in a stereo version of the Riddle arrangement, for the album The Nat King Cole Story. His version of the song was included in its entirety in the 2009 film Watchmen during the Comedian’s death scene. Nat Cole’s original recording was inducted into the Grammy Hall of Fame in 2000.

[via Lars Villemoes – dedicated to A.P.]