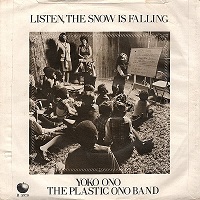 “Listen, the Snow Is Falling” is a song written by Yoko Ono and recorded by Ono and the Plastic Ono Band that was first released as the B-side of John Lennon’s 1971 single “Happy Xmas (War Is Over).” A version of the song was later released on a reissue of Lennon and Ono’s Wedding Album and was covered by Galaxie 500.