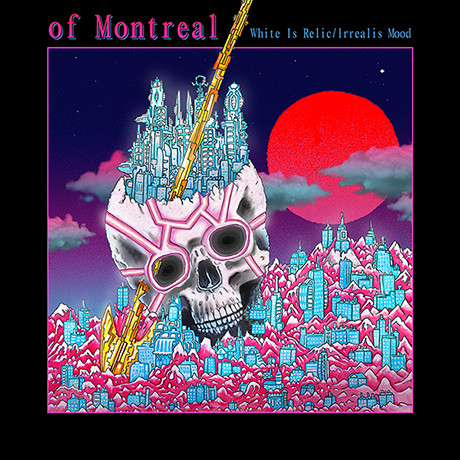 “Paranoiac Intervals/Body Dysmorphia” is taken from of Montreal’s new album, White Is Relic/Irrealis Mood, out 3/9.

Two important events occurred during the making of White Is Relic/Irrealis Mood. I became “Simulated Reality” paranoid and I fell in LOVE.

Well a lot more happened during the process of writing and recording, but those are the two big ones. I also reached a healthy point of self-forgiveness for my failed marriage and became deeply educated in the lies of America the Great.

I feel like a switch was recently turned on in my brain and now I’m beginning to see through the lies that have been fed to me my whole life by the masters of media and by those who control and manipulate the narrative of our cultural identity and social order.

My paranoia began during the presidential election cycle and reached a dangerous peak shortly after the inauguration. In the meantime I watched and read countless works of art in a mad effort to be reminded of how many truly brilliant people there are living/struggling among us and to try to maintain a positive outlook. The works of Angela Davis, Noam Chomsky, Chris Kraus, Ta-Nehisi Coates, and the Autobiographies of Malcolm X and Mark E Smith were all great inspirations, to name a few.

Musically, I was very inspired by the extended dance mixes that people used to make for pop singles back in the ‘80s. It’s so cool how a lot of the 80’s hits had these really intricate and interesting longer versions that wouldn’t get played on the radio and could only be heard in the clubs. I used that template with these tracks, I wanted them all to feel like the extended “club edit” of album tracks.

I also decided to abandon the “live band in a room” approach that I had been using on the recent albums and work more on my own or remotely with collaborators. I used the same drum sample packs throughout because I wanted the album to have a rhythmic continuity to it. I wanted the drums to have a strong and consistent identity, similar to how Prince’s Linn Electronics LM-1 drum machine played such an important role on his classic albums. Zac Colwell also played a huge role on this album, adding saxophones and synths to most of the songs. I also got a lot of help from long time collaborators, and “of Montreal” touring members, Clayton Rychlik and JoJo Glidewell.

The two title concept came to me when I was thinking about how difficult it is to frame the message of a song with just one title, because so often the songs are about so many different subjects. ‘White Is Relic’ was inspired by James Baldwin’s writings regarding the creation and propagation of a toxic American White identity. I’ve come to learn how it’s just a tool wielded by the 1% to give poor white people a false sense of superiority in an effort to keep the masses placated and numb to how deeply we’re all getting fucked by our capitalist rulers. An ‘Irrealis Mood’ is a linguistic indicator that something isn’t yet reality but does have the potential to become so.

I’m always searching for new identities so this concept of the death of “Whiteness” appeals to me greatly. Might be the only way to save the world.