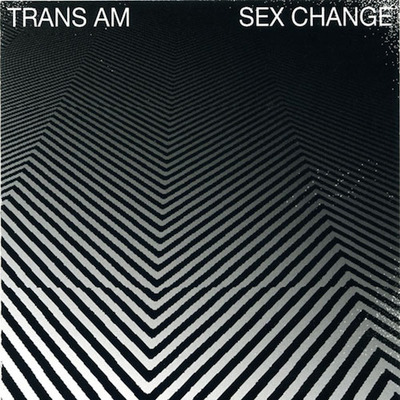 “Obscene Strategies” is from the album Sex Change by Trans Am, available on Thrill Jockey.

After Trans Am’s last album, Liberation – a bleak portrayal of life in a security-obsessed imperial capital – the band exploded and abandoned Washington, D.C. for three different continents.
The following period of programmed isolation found Nathan Means in Auckland, Phil Manley in San Francisco and Sebastian Thomson splitting time between London and New York. Internal contact was primarily electronic but for a handful of live shows.

With two years’ of separation fueling them, the band began in June 2006 on a program of sporadic rendezvous, reconvening briefly on several continents to work on what would become the most joyous and upbeat rock album of Trans Am’s chronicle.

In June of 2006, Trans Am reunited at MAINZ, a recording school in Auckland, New Zealand, with a few songs and almost no musical equipment. Recording moved forward with a wide range of borrowed instruments, keyboards and other gear, including a 1960’s Mellotron and remarkable vintage amps loaned by iconic New Zealand musician Chris Knox (Tall Dwarfs).

The MAINZ session was recorded by a professor at the school and a student receiving credit towards graduation. The arrangement was threatened when school administration discovered photos of the band drinking beer in the on-campus studio. Future drinking occurred off campus.

Two months later, recording continued in Brooklyn, New York at the Okropolis: headquarters of New York band Oneida. Determined to make a break with the past, Trans Am again arrived again with almost none of their signature gear: none of the vocoders, keyboards, drums, drum machines and amps that they used on previous albums.

Two weeks later the album was mixed at Tiny Telephone Studios in San Francisco. Compared with previous records such as TA and Liberation, which took months to complete, Sex Change was conceived, written, recorded and mixed in only three weeks.

Although Sex Change marks a break from their past, Trans Am have always embraced unnatural and perverse recording techniques and concepts.

In such a crush of time, Trans Am had to rely on traditional time and possibility expanding substances: coffee, yerba mate, et cetera, as well as a codified series of recording techniques called “Obscene Strategies”.

Brian Eno is well known for his “Oblique Strategies” in which studio engineers – faced with an apparent roadblock – draw a card from a deck. The card might suggest, “Take something perfect and make it more human”, with the intention of animating the track through an infusion of randomness.

Over many years, Trans Am developed their own Obscene Strategies to provide a less humanist and more time-sensitive set of guidelines for loosening creative blockages. Sample suggestions include:

#11 Take a nap
#16 Make it sound like Jackson Browne
#18 Rip off black musicians
#19 Invite all your friends over
#20 Check your email
#23 Leave the studio unlocked overnight
#31 Hose down the control room
#43 Pillow fight!

Perhaps the band’s geographical liberation was the inspiration for the creation of Sex Change, Trans Am’s most international and exhilarating album to date. Whatever the reason may be, Sex Change is a welcome and forceful return by a band that has been a consistent innovator and touring machine for over a decade.