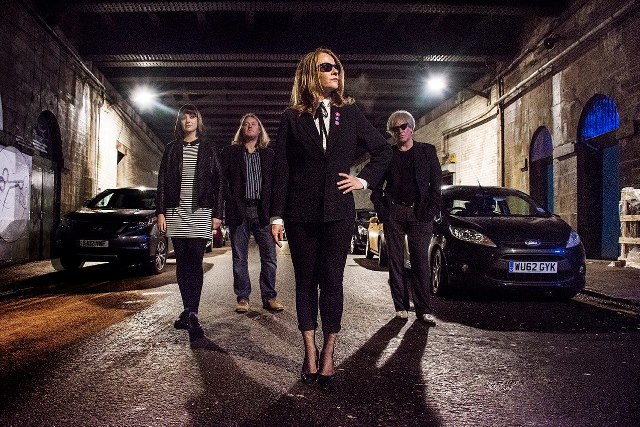 Fronted by spellbinding chanteuse Lou Reid, Lola in Slacks exude the sexy garage swagger of the Velvet Underground spiked with the bold confidence and freedom of Tim Buckley. There’s an acute sense of mystery around this ambitious, literate gang of Francophile bohemians, who have made an instant impact with a series of heart-stopping performances around their home town of Glasgow.

Having developed her distinctive vocal and performance style busking on the streets of Paris as a raw 19 year-old, Lou Reid casts a powerful glamour. A classic torch singer for the modern age, Reid brings a Piaf-like authority to the group’s Noir atmospherics and superior song-writing. Radiating an effortless cool, the singer evokes comparisons with Marianne Faithfull, Nick Cave and Jacques Brel in the songs she co-writes with guitarist Brian McFie. Inspired by the exhilarating Stooges guitarist James Williamson and the great soul player Teenie Hodges, McFie is equally adept at garage grind and spiralling melody.

Lesley McLaren has an established reputation as a great rock & roll drummer in her own right, while bassist Davy Irvin supplies a weighty undertow with the taste and precision of ‘Wrecking Crew’ legend Carol Kaye. Martin Stuart Taggart broadens out the band’s wide-screen sound with edgy, creative guitar, while Villy Karagouni is the group’s secret weapon, a classically-trained pianist who adds a whole new dimension to the band’s sensual fusillade.

Debut single ‘Tramlines’ is released on August 31st on Stereogram Recordings. ‘Tramlines’ draws the listener into a dramatic world of dark, shimmering beauty, illuminated by tantalising shafts of sunlight. Reid’s gift for imagery is readily apparent as she conjures sepia-tinged scenes wrenched from buried memories. An instantly addictive entry into Lola in Slacks’s bohemian netherworld, ‘Tramlines’ was recorded with award-winning producer Sandy Jones at Foundry Music Lab in Motherwell.

This is no average group. They understand that sometimes you have to pay for love with bitter tears. When Lou Reid sings, it’s a way of escaping, it’s another world; she’s no longer on Earth. Intimate and imperious in equal measure, Lola in Slacks are poised to become everyone’s new favourite band.

“’Tramlines’ is a stunning debut single…Lola in Slacks are the most original group I’ve heard in years. With its perfect blend of pop hooks and underground allure, ‘Tramlines’ deserves to be a massive hit.” Billy Sloan, legendary Glasgow music journalist and broadcaster.

“Reminds me of a less ravaged Marianne Faithfull, circa ‘Broken English’. Lovely atmospheric sense of place and yearning.” Tom Morton, broadcaster and journalist.

“I really like this track, kinda like Marianne Faithfull fronting the Velvets.” Douglas MacIntyre, Head of The Creeping Bent Organisation record label and bass-player with The Sexual Objects.