Regarded as one of glam rock’s anthems, the song originated after David Bowie came into contact with Mott the Hoople’s bassist Peter Watts and learned that the band was ready to split due to continued lack of commercial success. When Mott rejected his first offer of a composition, “Suffragette City” (from The Rise and Fall of Ziggy Stardust and the Spiders from Mars), Bowie wrote “All the Young Dudes” in short order specially for them, allegedly sitting cross-legged on the floor of a room in Regent Street, London, in front of the band’s lead singer, Ian Hunter. With its dirge-like music, youth suicide references and calls to an imaginary audience, the song bore similarities to Bowie’s own “Rock ‘n’ Roll Suicide”, the final track from Ziggy Stardust. Described as being to glam rock what “All You Need Is Love” was to the hippie era, the lyrics name-checked contemporary star T.Rex and contained references to The Beatles and The Rolling Stones (“My brother’s back at home with his Beatles and his Stones/We never got it off on that revolution stuff”) in a “wearied swipe at the previous generation”. Bowie himself once claimed that the song was not intended to be an anthem for glam, that it actually carried a darker message of apocalypse. According to an interview Bowie gave to Rolling Stone magazine in 1973, the boys are carrying the same news that the newscaster was carrying in the song “Five Years” from Ziggy Stardust; the news being the fact that the Earth had only five years left to live. Bowie explains: “All the Young Dudes’ is a song about this news. It’s no hymn to the youth, as people thought. It is completely the opposite. 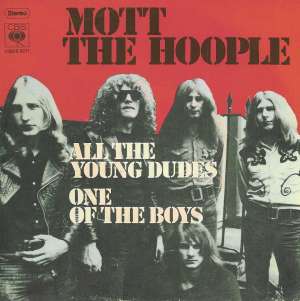