“My Sharona” is the debut single by The Knack, released in 1979 from their album Get the Knack. It reached #1 on the Billboard Hot 100 singles chart where it remained for six weeks and was #1 on Billboard’s Top Pop Singles of 1979 year-end chart. It was certified gold (one million units sold) by the Recording Industry Association of America. 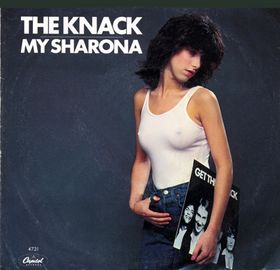