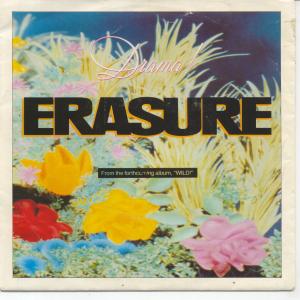 “Drama!” is the first single released by Erasure from their fourth studio album Wild!. It was issued by Mute Records. Written by Vince Clarke and Andy Bell, the synth pop song begins with a low-key keyboard line and a subdued vocal from Bell. As the song progresses, the instrumentation and vocals become more hectic, ultimately ending as a full-blown dancefloor anthem. “Drama!” is known for its mob-shouted “Guilty!” exclamation throughout and Bell’s intricate, multi-layered background vocals. Lyrically the song addresses a person who could be considered a drama queen, experiencing “one psychological drama after another” about everyday struggles that are universal and are easily dealt with by most people. Lines such as “your shame is never-ending!” are directed at the subject of the song. The mob’s vocals were added to by The Jesus and Mary Chain, who happened to be recording in the studio next door.